Submitted by undefined on
Author:A.V. Ramanjaneyulu, T.L. Neelima S.R. Kumar and V. Vasudeva Rao
Source:Kurukshetra Ministry of Rural Development, May 2010
Water is the most fundamental and indispensable component of natural resources and is an element of life. Water constitutes about 70% of the human body, by weight and several body functions depend on this resource. It is no wonder then that much of the history of mankind is caught up in the struggle for and use of water. 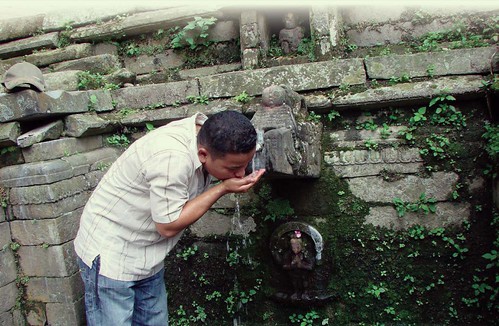 Water resources management is essentially the modification of the hydrological cycle for socio-economic development. It involves not only the beneficial use of water resources but also the prevention, avoidance or minimization of the effects of water excess (flood) or deficiency (drought) (Douglas, 1973; Ayoade, 1975). Consequently, the major elements of water resources management include water supply for domestic, municipal and industrial uses, agriculture, hydro-electric power, navigation improvement, drainage and flood control,outdoor recreation, fish and wildlife conservation. This paper focuses more on the application of indigenous knowledge systems for water management mainly for agriculture, domestic, drainage and flood control and conservation purposes.

India has been nurturing a traditional civilization over a period of 5,000 years. India’s ancient scriptures, teachings of sages as well as innumerable sayings and proverbs contain profound store-house of ideas, concept and practices that are designed to address theprocess of building harmonious relationship among man, animal and nature. The literature is mostly based on indigenous technical knowledge (ITK ) experiences that gathered momentum through generations and are being developed and standardized throughinnumerable experimentation and practices. The enhancement of the quality of life of the Indians who in great majority live in and depend on agricultural production systems would be almost impossible if this rich tradition of ITK is kept inside.

Indigenous knowledge (IK ), or indigenous technical knowledge (ITK ) systems are facts to those who see them as ways of knowing or looking at the world. Some aspects of indigenous knowledge are facts as western scientists know and define fact.Some of it is belief as philosophers and theologians define belief. And a lot of it is folk wisdom or common sense. These systems are learned ways of knowing and looking at the world. They have evolved from very many years of experience and trial and error problem solving by groups of people working to meet the challenges they face in their local environments, drawing upon the resources they have at hand.

Indigenous people are the original inhabitants of a particular geographic location, who have a culture and belief system distinct from the international system of knowledge (e.g., the Tribal, Native, First, or Aboriginal people of an area). Some feel that such a definition is too narrow, in that it excludes peoples who may have lived in an area for a long period oftime but are not the original inhabitants. This has led to widespread use of the term local knowledge, a broader concept which refers to the knowledge possessed by any group living off the land in a particular area for a long period of time.

Comparison of ITK with modern practices

ITK may be old, but it need not be outdated. In fact it can very well be compared with modern practices in a number of situations. 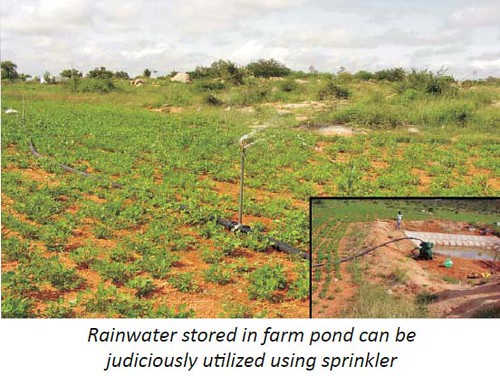 Possibilities to use ITK

1. The monsoon rains used to flow as surface runoff, from the project area to lower elevations. The waters were laden with soil, eroded from the hillsides. These events provided continuity in a pattern of land degradation that began in the middle of the 19th century with the destruction of forest in the area by outsiders. The water-related hardships of daily life were borne by women and older children. The people had health problems, such as dermatitis and gastrointestinal conditions, arising from theshortage of water. The tribal and rural people of the partner villages adopted technologies for water harvesting and spreading during the period 1992-96. The technologies are in use all year round. The practice employs a wide range of approaches to water conservation and utilization in demonstration sites. Variousbarriers (contour bunds, nalla bunds, check dams, gabions) and shallow excavations(contour trenches, farm ponds, reservoirs in bedrock), at right angles to the slope, arrestthe flow of surface runoff. Contour hedging and the replanting of non-agricultural land were introduced. These measures complement the terracing of hill slopes for agricultural purposes. Shallow excavations improve the infiltration of water (recharge pits and trenches). Masonry tanks contain the water from springs and seepages. Wells that have been dug are deepened; other wells are re-bored, thus making better use of the aquifer. Water is also collected from the roofs of dwellings. Domestic wastewater is used to irrigate the small kitchen gardens adjacent to dwellings.

2. Infiltration (recharge) pits, in the vicinity of dug wells, had the effect of improving water yields. Existing bore wells were given an extensive workover in order to improve their yields.

3. Indigenous knowledge made an important contribution to the selection and sitingof technologies for water harvesting and spreading. People contributed detailedknowledge of the relationships between local topography and water sources on a year-round basis. This was especially important during the driest months of the pre-monsoon period (February-May).

4. People applied traditional practices to the location of ground water. For example, thetribal and rural people used to worship a tree, Ficus glomerata, known locally as umbar,for various reasons. It is also an indicator of shallow ground water. The presence ofumbar marked places where wells were dug to tap springs. The people also provided a soil classification which proved to be a useful basis for categorizing the aquifer properties of local earth materials.

5. People used to erect stone bunds across the larger streams and their tributaries. Plantmaterial accumulated near the stream banks to form a type of compost known locally asmarwa. The people built terrace bunding on the slopes between the streams and smallertributaries. They recognized differences in soil quality between the ground along the larger streams and that around the tributaries. As a result, the people were able to discuss the merits of alternative water-harvesting and water-spreading techniques that could be introduced during the project.

6. In Mali, Africa, the Dogon ethnic group usually builds small earthen ridges around some sorghum or millet stands. Such ridges which are often 20 to 30cm tall possess a rectangular or a beehive shape and are known to conserve the drops of rain falling within them. Stone lines (gandari) have traditionally been used in the Ader Doutchi Maggia area of Niger Republic to conserve water and trap sand blown by thewind. This region has an annual rainfall of 250 to 450mm, and is situated on a plateau with fertile valleys and barren plateaus. The stones are laid out in straight lines (grid pattern), following the natural contour line. Once laid out, the stones are covered with sandy-clay soils known locally as fako, stalks of cereal and manure are strewn on the land to trap sand. Land areas treated in this way, would regain their fertility within 5 to 6 years. The Mossi farmers of Burkina Faso have practised terracing farming for centuries. For this purpose, bunds made of stones are placed on cultivated land to build up terraces which retain water and soil moisture. The stone bunds are built up over the years, reaching about one meter height, especially during the off-farm season (dry season). The semi-permeable bunds allow for gradual seeping of water and prevent therun-off caused by the scarce but very intensive rains, thereby mitigating the risk of both crop failure and soil erosion. 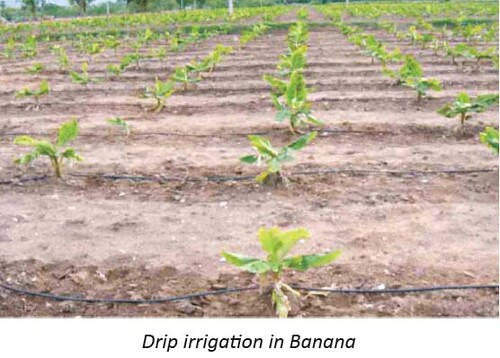 7. Roof water harvesting was introduced into the villages as a partial response to thepriority placed by the people on a domestic water supply. The houses in the villagesare of stone and mud and have tiled roofs, which form effective catchments. Gutters ofgalvanized iron were added and connected to ferrocement storage tanks by means of PVC pipe.The harvesting of rainwater from roofs maximizes the efficiency of run-off collection. This is because the characteristic pattern is the scattering of small rainwater catchments, each serving an individual farm, homestead or hamlet. Rainwater harvesting promotes flood and erosion control, groundwater recharge, and reduced silting at major rivers and streams. Similarly, run-off farming offers these same environmental benefits. In the Ader Doutchi Maggia region, Niger Republic, the stone lines (gandari) have been used successfully for the rehabilitation of barren degraded lands and it is being replicated elsewhere (Reij, 1990). In Kenya, the “hoop” micro-catchments have restored degraded lands without negative effects. Once theperennial grasses begin to flourish within the hoops and spread beyond them, thegrass itself binds the soil together and runoff is effectively retained. Traditional rainfedirrigation systems have proven to be more profitable than modern large-scale irrigationsystems in Africa. In Chad, the World Bank (1989), for example, carried out a financialand economic rate of return (ERR ) analysis for arable crop production. The study indicated the cultivation of rice, wheat and sorghum was most economically viable under the traditional rainfed Drip irrigation in Banana irrigation system. 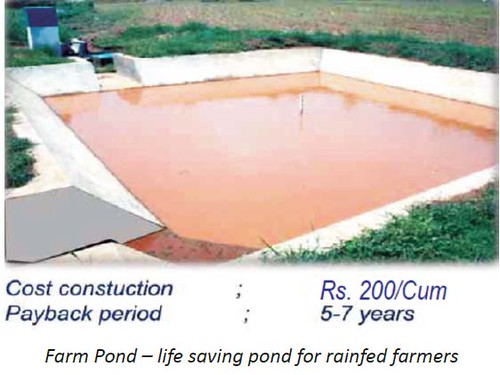 Some of the farmers and other participants of 7 days training programme on water management organized at RAR S (ANGRA U), Palem, Mahboobnagar dist. expressed the following aspects regarding prospects of good or bad rains during ensuingmonsoon season

1. More flowering/better seed set in Mango or Moduga or less flowering/poor seed set inTamarind during summer season indicates good rains during ensuing monsoon. Seed formation occurs in front portion of fruit is a sign of ‘ON’ year while seed formation in the rear portion of fruit is a sign of ‘OFF ’ year in respect of rains. Hence, there is a say in Telugu “Karuvuku chinthal, kalanikini mavillu” means Tamarind for drought and mango for good rainy season.

2. Cloudiness towards South West side of Bijnapally mandal in Mahboobngar dist. Andhra Pradesh is sign of good monsoonic rain.

3. I f the temperatures are high during first 10-15 days of Jaishta month, the ensuing monsoon will be good.

I. Presence of orange colour on the neck of cattle egret before laying eggs is sign ofgood rains.

III. If the Carmonents orient it’s wings towards back side, it is a sign of drought

IV. High movement of Piedcrested cuckoo is a sign of good rains

I. Presence of high population of Phycus glomerata (generally present in Agencyareas and is worshipped by tribals) indicates presence of water table at shallow depth

II. I f the blooming in Prosophis cineraria is good, the ensuing rainy season will beFavourable.

I. It has been a practice since ages, conserving the rain water in tanks, ponds and wells and the water, constructing rocky structures across water flows, ploughing across the solpe and dividing the field into small plots bunded four sides

II. Water used for bathing in the ponds of Mahananadi, a temple town near by Nandyal, Kurnool dist. A.P. is used for irrigating near by cropped field of Banana and other crops(Kumaracharyulu, 2007). It has been a practice for the fast many years. 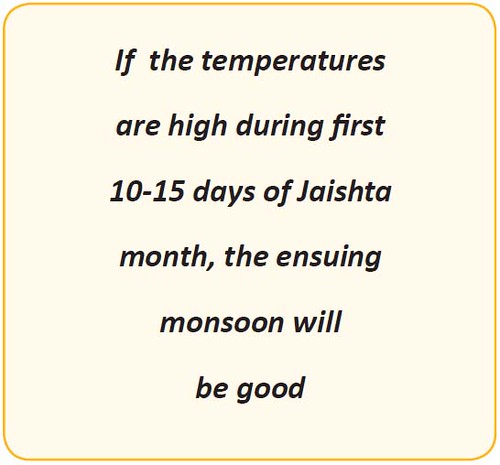 In the olden days, when elelctric motors were not in vogue, two persons used to irrigate the field by taking out water with the help of iron baskets tied with ropes on either side. This is called ‘Chata neeru’.

Based on historical long period average data, the India Meteorological Department (IMD) with the help of simulation models predicts and issues short, medium and long range forecast through mass media and bulletins for the benefit of farmers and researchers.

It can be deduced that a blend of indigenous knowledge of old and experienced persons,some of the beliefs and traditional practices and modern and efficient water management practices are the need of the hour in order to conserve and utilize the water resources in an efficiency way to lead the life in a sustainable way.

Sectoral Allocation and Pricing of Groundwater