Submitted by undefined on
Author:Dr. Anju Bhatia and Shreya Vyas
Source:Kurukshetra Ministry of Rural Development, May 2010
The study indicates that the condition of the community tankas was quite poor. They were totally defunct and were mainly used for defecation and garbage disposal. They were devoid of any sort of care and maintenance.

Water has been harvested in India since the dawn of civilization. The Ramayana, Mahabharata and various other Vedic, Buddhist and Jain texts contain several references towater harvesting structures in existence and water being revered as a life giving and sustaining force.

Rainwater harvesting (RWH) is one of the oldest means of collecting rain water for domestic purposes. Hundreds of years ago, the rulers of princely states in Rajasthan had created RW H structures. These catered to the local needs, utilised local resources and were based on the wisdom and knowledge handed down from generation to generation. These indigenous technologies did not require skill, technology, management and fuel that need to bebrought in from outside. They replenished each year with monsoon rain and served the people throughout the year. These were environmental friendly and represented the ingenuity of inexpensive and simple technology. 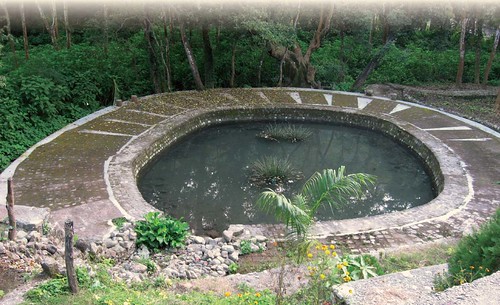 Rapid urbanization and an ever-increasing population in the recent decades have not onlycontaminated water bodies but also exerted an additional pressure on the scarce resources. RWH is now getting increasing attention after having been ignored for decades.

The various traditional methods of RWH which were in use in Rajasthan included kundi kui/beri, baori/ber, jhalara, nadi, toba, tanka, khadin, johad and anicut (Singh, 1997). These structures had their own peculiar features and were prevalent in different regions depending upon the local terrain and conditions. The RWH structures in use were constructed either for individual use or for the use of the village community. Water from these sources was used either for domestic or irrigation purposes. In the study area, tanka was the prevailing RWHstructure.

A tanka is a small circular or square underground tank constructed with lime mortar or cement plaster. It is normally constructed on fallow ground where surface run off can be diverted to the tank by creating a clean catchment (paytan) all around. It is constructed either for an individual family or for a community. The community tanka is generally constructed for a school, panchayat ghar or a large settlement such as a village. It is usually circular inshape and has almost similar depth and diameter, varying from 3 to 6 metres. It is often beautifully decorated with tiles, which helps keep the water cool. The water is normally used for domestic purpose.

The traditional RWH structures were ignored after independence with piped water becomingeasily available. Over the years, they became either defunct or were being sub-optimally utilized. Realising this, the Government has taken some measures to strengthen the RWH structures. However, much needs to be done in this regard.

A micro level study was designed to study the present status of traditional RWH methods, analyze the constraints being faced in their management and to assess the quality of harvested water for household consumption. The study was carried out in Nokha tehsil in Bikaner district of Rajasthan. A village named Jangloo was purposively selected as ithad an annual rainfall of 186 mm, which was much below the average rainfall of the tehsil, faced acute shortage of water during summer months, had a very low water table (430-480 feet) and had presence of traditional RWH systems for the last 150 years. The supply of water was through open wells, tube wells and ponds. The village had both household as well as community tankas. However, the community tankas were generally defunct.

As per the Census, 2001, the village had 735 households. Agriculture and livestock rearing was the main occupation. The village had two types of habitants, those residing in the village itself and those residing in dhanis, which were hamlets located on agricultural farms around the village. Stratified random sampling was used to select 95 households (50 from various dhanis and 45 from village area) having tankas at their houses for the study. For testing the quality of harvested water 8 tankas were selected. Among them 4 seemed to be in satisfactory condition and the other 4 were poorly maintained.

Primary as well as secondary data were used for the study. The primary data were collected through semi-structured interview schedule. Resource mapping was used to mark the households having RW H structures.

The study revealed that 475 households (64.6 per cent) were having their personal traditional RWH structures namely tankas. Of these, 282 (59.3 percent) tankas were in dhanis while 193 (40.6 per cent) were located in the village itself.

Two thirds of households had nuclear families. Over half the households had family size ranging from 4-8 members. A huge majority (86.3 per cent) were having minimal monthly income of up to Rs 3,000. One out of ten families had more than 8 livestock and were all from dhanis.

Among the various RW H structures, tankas were the only traditional method of rainwaterharvesting in the village. It was found that 91.6 percent households were having one tanka at their house whereas the remaining households had two. The latter were all located in dhanis where no other source of water was available.

The size of tanka depends on various factors like availability of space, finance and water requirement of the household. The water holding capacity of tankas in the village varied from 45,000 to 200,000 litres. Small tankas with 45,000 litres of water holding capacity were more common (60 per cent). During discussion with the respondents it was found that as per requirements, the excavated material floor (paytan) surrounding the tanka should be equal tothe depth of tanka. However, most houses lacked enough space; thus the tankas at household level were small in size.

In olden days, tankas were built to collect only rainwater. But now-a-days, as water through piped water supply and paid water tankers/camel carts is also available to the villagers, the tankas were found to be used as storage tanks. Whenever the water level of the tanka went down, water from other sources was used to get them filled.

Usage of water from tankas

The water of the tankas was consumed for human as well as livestock needs. For dhanidwellers, no other source of water was available in near vicinity. Hence, they were fully dependent on the tankas for their water requirements for their human as well as livestock needs. In case of village households, only one third (35.5 per cent) were found to be using water from tankas for household purpose.

Constraints in management of tankas

Difficulty in fetching water was reported by all the respondents. This was due to no mechanical device (such as pulley) being available at the tankas. Further, the tankas were also not getting completely filled up because of scanty rains leading to lowering the water level. Before rains these structures require thorough cleaning of paytan as well as theirinsides, which is considered very time consuming and laborious. As the tankas were generally old and made of limestone, they were getting cracks easily and required regular repairs.

The condition of the community tankas was quite poor. They were totally defunct and were mainly used for defecation and garbage disposal. They were devoid of any sort of care and maintenance.

Rainwater is considered as the purest form of water. However, when collected in RWH structures, its quality depends upon the care taken in cleaning and preparing the catchment area, the RWH structure as well as its maintenance. The study found that the tankas in the village were also being used as storage tanks. Whenever the water level in the tankas was low, the people were obtaining water from outside sources and storing the same in the tankas.

The quality of water as obtained from the selected tankas was ascertained by perceptionof those who were using it as well as through laboratory testing. The physical properties such as appearance, taste and odour were ascertained through perception. While all the respondents felt that the water from tankas was sweet in taste, most (92.6 per cent) felt that it was clean in appearance and less than half (46.3 per cent) mentioned that the waterwas odourless. 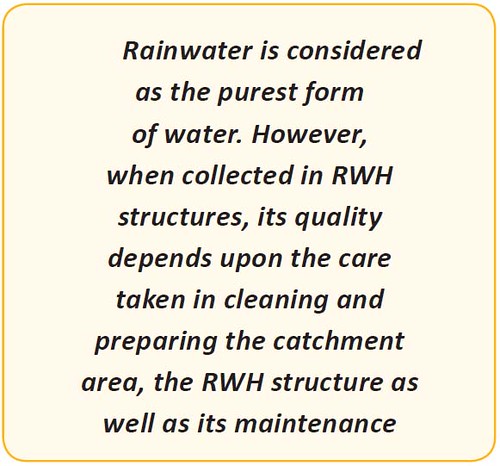 Although two-thirds households in the village had traditional RWH structures and the water was potable, yet the utilization was not optimal. The availability of other water sources had changed the attitude of village people towards this culturally rich heritage of the region. Villagers found it more convenient to fetch water from the other sources available in the village rather than use household tankas. The people relied on the tankas only whenno other water source was available. As the ‘we’ feeling was vanishing in the village, there was no one to look after the community tankas. Therefore they had fallen into disuse.

The prevailing scenario in which water consumption is increasing and the groundwater tableis fast depleting brings forth the need for reviving old RW H structures. Modern materials and technology can be used to give a facelift to old RWH structures. Although efforts have been initiated in this regard yet they require scaling up and sustainability.

For revival of RWH structures, two aspects are crucial. First, the community requires tobe sensitized and mass awareness needs to be created regarding the alarming situation ofwater and the need for harvesting every drop of water even when the other sources ofwater are available in their village. Second, maintenance of community tankas should be under the gram panchayat or other local community agencies. Government agencies,non-government-organizations, activists, media and academic institutions, especially institutes of technology need to work together and create a synergy effect to march towards a common goal, which is to save our thousand years old heritage.

Marine fungi : a source of cosmeceuticals